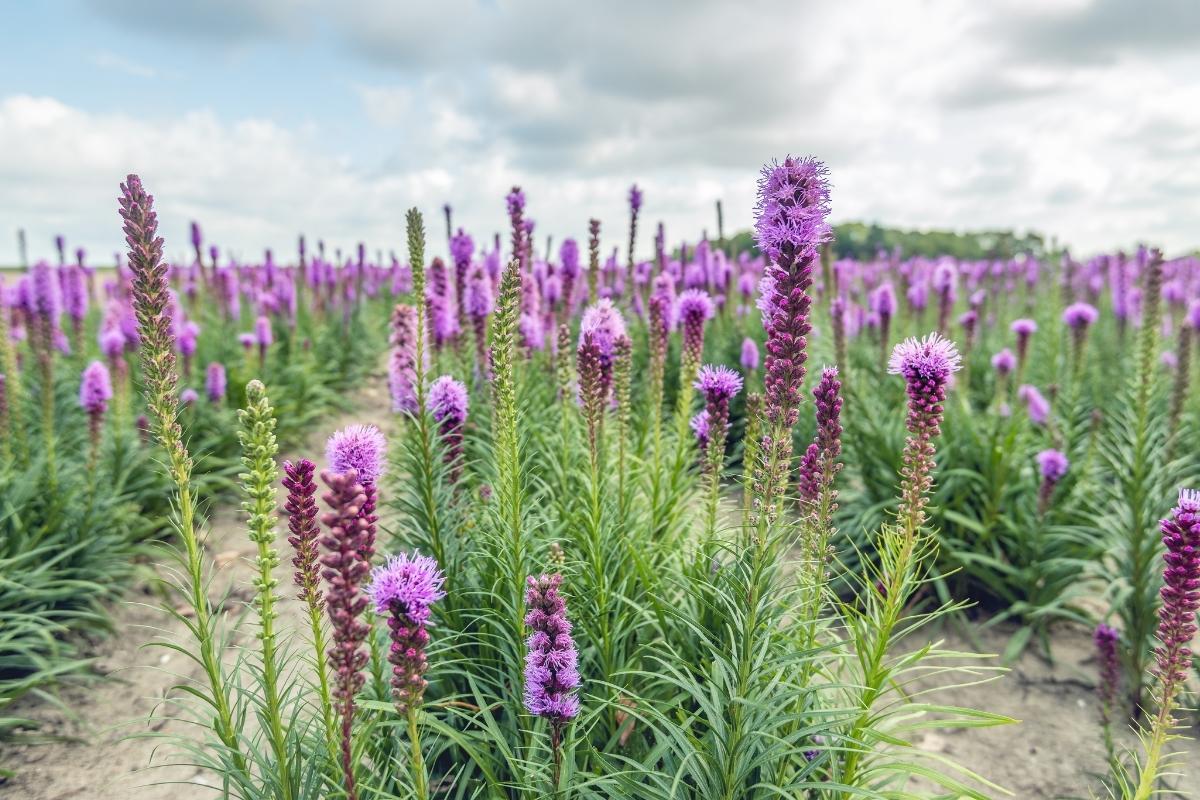 Liatris spicata commonly grows across prairie regions adjacent to the East Coast in America. This plant requires many hours of sunlight per day and a reasonable amount of water. While it doesn’t need an overwhelming amount of care or maintenance, it does still need to live in the best conditions to reach its potential.

Liatris plants are capable of blooming from the early months of summertime, into the autumn season. That means that you might notice these flowers starting to bloom as early as May, while some may wait for the temperatures to get a little cooler, closer to the autumn time of year to bloom.

Natural conditions and garden conditions for this plant can be very different. In ideal gardening conditions, Liatris can grow much more efficiently than it might in the wilderness. The ‘blazing star’ might surprise you at how quickly it can bloom and reach its growth potential.  In addition, don’t forget that Liatris will return to bloom around the same time every year due to it being a perennial plant.

Other varieties of Liatris may have slightly different bloom times. The ‘tall blazing star’ variety can bloom from August to October. Source.

Poor soils are not generally the best for Liatris spicata.  While they may be able to tolerate it and survive, it’s much better for these plants to be exposed to moist soils.

If you are planting Liatris into your full-sun garden, you should expect to water it at least once every seven days. During this time, it will have the chance to develop a sufficient root system. Liatris can generally survive on its own with very little assistance after this point in time.

Liatris is also capable of retaining its health, even in lengthy droughts. The key is whether or not it has had time to build up a root system underground to support itself during dryer portions of the year.

How Long After Planting Does Liatris Bloom?

If planted during the early months of spring, you could expect Liatris to bloom in as little as two or three months. The plants generally take advantage of slightly cooler temperatures to build themselves up for the upcoming summer portion of the year. Once the summertime arrives, the plants will generally bloom before the 90-day mark after being planted. In addition, they’ll return every single year if allowed to thrive in their local environment.

It’s even more exciting to know that this perennial plant has a reasonable lifespan that can reach up to ten years, especially when properly taken care of. Every single year, you can expect these beautiful flowers to bloom between the spring and summer months, and sometimes even extend into the fall season.

If Liatris isn’t being planted during the early spring months and isn’t receiving reasonable care, the timeframe for blooming can shift into unfamiliar territory. It’s generally not possible for these plants to bloom within sixty days of being planted, but that window of blooming potential starts to open just after the two-month mark.

How Does Liatris Spread So Quickly?

Liatris can spread quickly by self-seeding from the flower stalks. The vibrant flower is very sustainable, while also being relatively low in overall maintenance. The self-seeding capability of spreading is ideal in local temperatures around 65 degrees Fahrenheit.

There is one more trick that Liatris secretly contains. The ‘blazing star’ can also spread underground by expanding its corms. Both methods of spreading are very efficient and can be favorable depending on the local habitat.

Which Regions Does Liatris Bloom?

If you took a look at the globe of the planet Earth, you would quickly determine that nearly all Liatris perennial plants are located on the East Coast in America. This plant species loves to bloom across the prairies of the United States, due to local temperatures and habitat conditions.

While the ‘blazing star’ can be found across the prairies of the United States, there are also some parts of Canada, where you would come across Liatris’ perennials blooming in the wilderness.

Can Liatris Bloom During A Drought?

Liatris spicata is tenacious enough to survive and bloom in droughts. The main requirement is for its internal root system underground to have enough time to grow large enough to support itself.

If this root system is not effectively developed, Liatris can fail to bloom in dryer climates. There’s also an important factor that comes into play, particularly in terms of the severity of the drought.

Be sure to water your Liatris if it’s in your personal garden. This can help to ensure that it blooms efficiently at the appropriate time of the year. Keep in mind that overwatering this perennial plant can cause more harm than good.

Why is My Liatris Not Blooming?

Probably the biggest reason that Liatris may have trouble blooming, is the location where you have planted them. Because these plants thrive in specific conditions, they may not grow well in areas that are not optimal.

Other issues include not having the right PH in your soil. It should be at around 6.8 PH with slightly acidic soil conditions. Also not using the correct ratio of fertilizer can cause blooming issues with Liatris. The nitrogen levels should not be higher than the phosphorous levels.

Liatris seeds naturally take about four weeks to germinate. To help them bloom effectively, cut them back and trim their spikes. By trimming spikes and leaves, you’ll help the Liatris plant be ready to bloom for the upcoming year.

Liatris is a tall plant, that usually has stalks around 1-5 ft tall. Because it prefers moist soil, this can cause the spikes to fall over. You can keep this from happening by watering less in July and August. This will keep the plant more stable. Source.

I've been growing perennial flowers and plants for over 30 years. I love being with my family, gardening, hiking, and spending time in nature.

If you have ever wondered if hellebore can be grown in pots and containers, then you have come to the right place. We’re going to give you some tips and tricks for growing hellebore in containers,...

Continue Reading
link to What To Do With Hellebores In Summer?

While hellebore plants don’t generally require a whole lot of maintenance, there are still some things that you can do in the summer to help them grow more efficiently. Since many hellebores go...

We have been gardening for over 30 years. Perennial gardening is something that I have done with my family, going back generations. We love flowers and gardening, and we love to share our experience on how to care for perennial flowers.