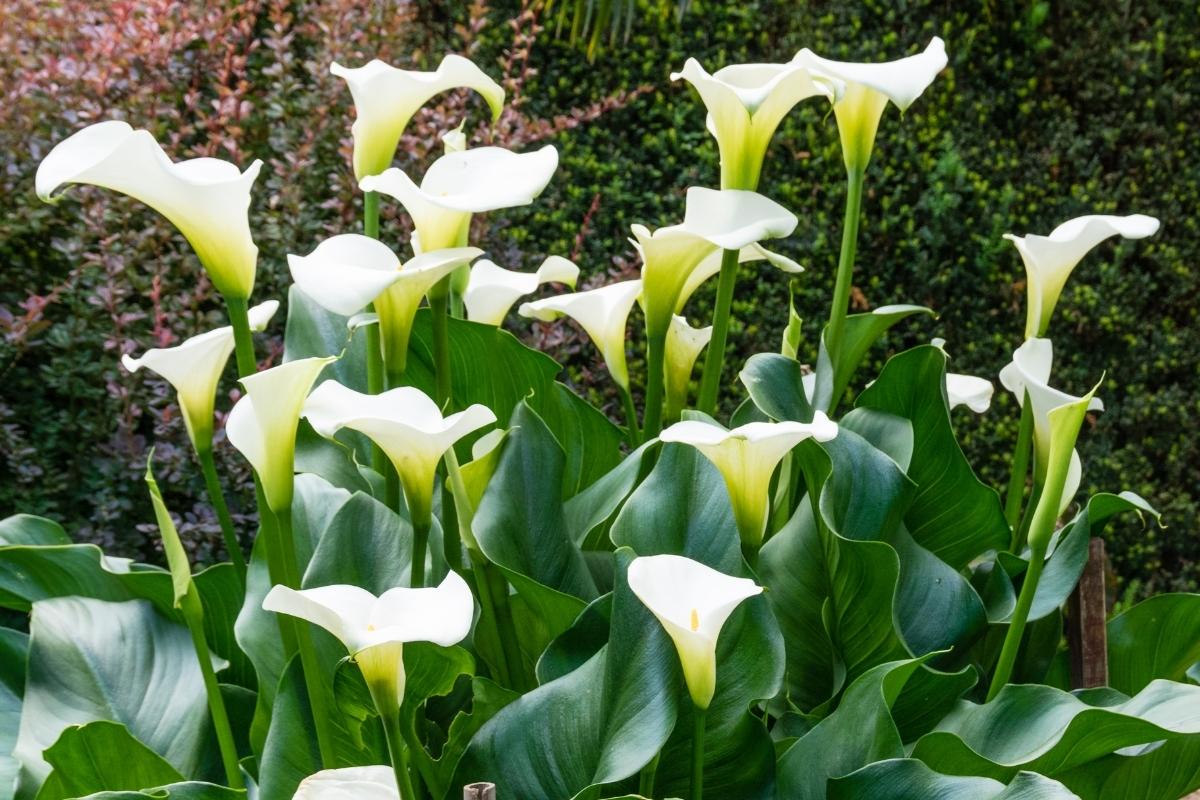 While also a common choice to perennial gardens, Calla lilies are most commonly found in their native region of South Africa. Their visual appearance offers a variety of vibrant colors that will catch your attention and mix well within your garden.

Calla lilies are native to South Africa, although they can make a great addition to flower gardens in similar climates. Coastal prairies are the most common location to find calla lilies growing, however, they can be found in other regions as well. They grow 1 – 3 feet tall and their flowers come in multiple colors.

Calla lilies show the greatest potential while growing in warmer climates where the temperatures are higher on average. In warm climates, it’s best for calla lilies to be exposed to full sunlight throughout the day.

They are capable of tolerating partial shady conditions in their local environment in certain types of warmer climates as well.  Since it belongs to the ‘Araceae’ family of plants, calla lilies share similar characteristics with each of the other seven species of perennial plants that are also included in the same family of flowers.

One interesting fact about the calla lily is that some people perceive it as a ‘symbol of imminent death’, while others view it as the opposite.

Do Calla Lilies Come Back Every Year?

Calla lilies can make any garden stand out. However, the best thing about these flowers is that they are perennials. This means they come back every year. Perennials usually take very little maintenance, and they return every year with blooms.

If you are planting a flower garden or a mass flower garden, you should consider calla lilies as part of the design. They make great border rows and can even be the center of attention in the garden with their sleek, eye-catching blooms.

What is the Calla Lilies Mature Full Size?

Calla lilies can have their size vary depending on their local environmental conditions and soil conditions. They prefer well-drained soil that remains moist, although they can tolerate other types of soil.

Calla lilies grow to a fully mature size of about three feet in height. They can be anywhere from two to three feet wide as well. Smaller variations of this flower can result in the mature size being cut by as much as fifty percent.

Why is the ‘Calla Lily’ Considered to be Invasive?

One of the unfortunate circumstances about the calla lily is that it has actually become an invasive species in locations like Southern California and Western Australia. Some experts believe that the calla lily is capable of harming some of California’s native plant species that live in adjacent regions. Source.

You can easily find calla lilies in many different color variations. While they are commonly found in white, pink, and other color varieties

The color of the flower can be impacted by the amount of water that it has and the type of sunlight that it receives every single day. The different colors don’t impact the toxicity of the flower, which is ultimately poisonous to all animals and humans.

Calla Lilies Are Toxic To Humans and Animals

The roots of the calla lily flower are the toxic part that could potentially harm humans or animals. Harmful side effects could be experienced from eating this flower. This is not only true for humans but also for most types of animals.

It’s not even a good idea to touch calla lilies due to the risk of being exposed to insoluble calcium oxalate crystals. The side effects of this toxin are not limited to swelling and pain. Source.

When Do Calla Lilies Bloom?

It’s important to know that calla lilies are commonly found blooming during the later portions of spring. They can also bloom throughout the late summertime. They are considered to be perennial flowers that will bloom every single year at approximately the same time.

After a calla lily blooms, it’s acceptable to reduce water maintenance for a little while. Overwatering your calla lily can cause more harm than good. Maintain a solid, rich soil that is well-drained for optimal blooming conditions.

Variations of the Calla Lily

There are a couple of different variations of the calla lily that you might be able to observe in the wilderness. The ‘Zantedeschia aethiopica’, also known as the common calla lily, is the variation that is most commonly recognized with its traditional white and yellow colors.

There’s also the ‘red-tinted’ variation that commonly sports vibrant red colors with tints of orange mixed in as well.

Commonly nicknamed the ‘sunshine’ calla lily, this variation included bright yellow-tinted flowers that can be seen by the naked eye from long distances.

The remaining variations can be found with purple and white flowers and don’t have any specific nicknames. While each variation of the calla lily may have a slightly different color, they all require the same types of maintenance and can be found in the same local environment. All of the other characteristics also remain the same, regardless of their color.

History of the Calla Lily

After being discovered in South Africa during the 18th Century, the traditional ‘calla lily’ became a well-known member of the ‘Araceae’ family. Many people believe that the calla lily is representative of a spiritual connection that signifies rebirth.

Other perspectives share in the belief that the calla lily brings good luck to people. While the historical path of this flower could lead you to any kind of emotional perspective, it’s important to note that this perennial flower is a vibrant and beautiful example of what nature is capable of producing.

Can Calla Lilies poison humans or animals to death?

While death is fairly rare and uncommon, calla lilies can be poisonous and have negative side effects. Proper precautions should always be taken due to the risks associated with coming in contact with the insoluble calcium oxalate crystals.

Why are Calla Lilies invasive in Southern California and Australia?

The primary reason that calla lilies have been deemed with an ‘invasive status’ in California is that they pose an existential threat to other native species of plants and flowers that exist in California. In many ways, the same thing can be said in Australia where calla lily variations are also found to be ‘invasive’.

I've been growing perennial flowers and plants for over 30 years. I love being with my family, gardening, hiking, and spending time in nature.

link to When to Plant Hellebores (With Examples)

Hellebores have a large window for when you can plant them. However, there are a few things that you will want to avoid if you plan on planting them in the winter or summer months. Let’s take a...

If you have ever wondered if hellebore can be grown in pots and containers, then you have come to the right place. We’re going to give you some tips and tricks for growing hellebore in containers,...

We have been gardening for over 30 years. Perennial gardening is something that I have done with my family, going back generations. We love flowers and gardening, and we love to share our experience on how to care for perennial flowers.